skip to main | skip to sidebar

An Early Morning Wake-Up Call and A Ride Around the Property - Lake Placid, FL 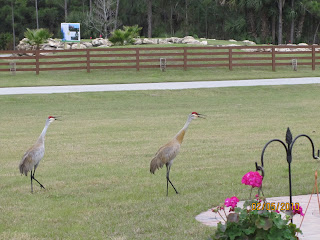 Actually, I was already up and had taken Kasey outside, when I heard the strangest noise coming from the back of the house.  Here's what we found as we walked around the house, sandhill cranes.  These two seem to have adopted the place and think the yard belongs to them.  They were not aggressive, and Kasey really didn't seem to be bothered by them.  At least, he didn't chase them.  The cranes make a loud honking sound and they do it at the same time.  I'll try to get a short video tomorrow to post so you can hear them.  They hung around for awhile, and pooped on the back patio, but we didn't see them the rest of the day.  Sandhill cranes mate for life, so I assume this is a male and female.

We decided to take an earlier morning drive around the property to see if we could see any more wildlife; and, last night while riding around with Renee, one of the managers, we didn't see the seven horses that are free to roam the property.  She said that's not unusual, but we wanted to see if we could find them this morning.  No such luck!!  There are several  large stands of scrub palms and trees, so they must have been hiding in one of them.  We'll check on them again tomorrow.  But we did see the two draft horses, Annie and Mae, who hang out together.  They don't join the other horses, but they love treats, so need to remember to take carrots tomorrow.  Will post a picture of them later.  There are also two horses who stay up toward the front of the property and especially around the house, in addition to the three in the corral by the house.  The ones in the corral are being treated for various ailments, and the other two are a couple of loners who have teamed up together, but don't join the regular herd. 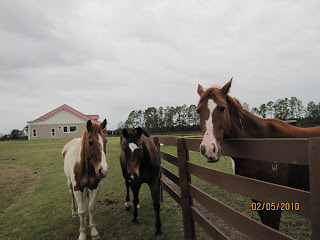 Itchey is on the left; Mama, who is due to foal in about a month, is looking over the fence, and Turbo is in the middle.  They are all very friendly, but not aggressive.  Kasey just ignores them, and they don't bother him.  At least he doesn't try to herd them.
The BIG thrill of the day was the wild hog we saw.  Renee thinks there are 2 or 3 of them, but we only saw one today.  They stay at the back of the property which is about 3 miles from where we are parked. 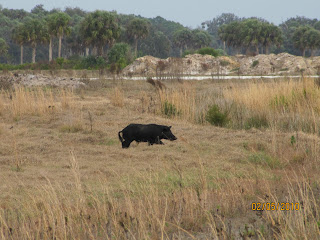 I had no idea they were that big.  And we were probably 300 feet away, and not planning on getting any closer!!!!  :)  He never even looked our way, but ambled off into some denser foliage. 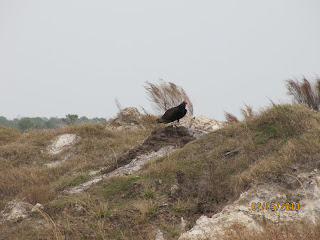 Not sure what kind of a bird this is, but he's the last of the wildlife for today.  Need to dig out the bird books.
Also saw a large turtle at the edge of one of the ponds, but he slipped into the water before I could get his picture.
We had quite a bit of wind and rain this evening, but it's just sprinkling now.  Glad the wind isn't blowing like it was earlier.  Looks like we're really going to enjoy our time here, even though it's out in the boonies.  Hope to get some good sunrise pictures tomorrow.
More later.......
at 9:34 PM 2 comments:

I know I've been very lax in posting, but seems we needed some time to just unwind.  We settled in at Little Charlie Creek Campground and reunited with friends we met when we stayed here last February.  It's always nice to see familiar faces and get caught up with everyone.  I'll catch up with our activities for the past month in another post.  Dan has been doing something he's wanted to do for years!!!!  Will post pictures and tell all about it tomorrow.

For now, just want to share where we moved to today.  We are at Saddle Ridge, a 1200 acre gated housing development especially designed for horses and the people who own them.  We are parked in the driveway of the model home to just be a presence here - free rent for 3 months.   The area is plotted out in 10 - 17 acre sections for a total of 98 housing plots.  There are meadows, live oaks, ponds, deer, wild turkeys, armadillos, sandhill cranes, alligators and a herd of 13 rescued horses.   www.saddleridgefl.com

This is the model home on the front of the property with our motorhome parked in the driveway.   Notice the motorcycle is off the truck.  Dan went for a ride around the property 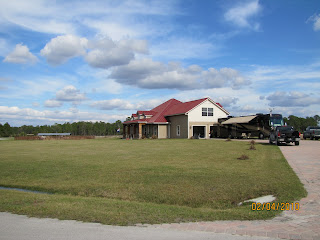 The back patio and back yard with hammock in place.  Yes, that is a horse in the background.  His name is Itchey. 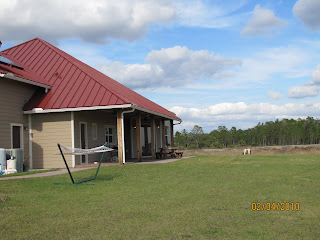 This is the view off the back patio of the house. 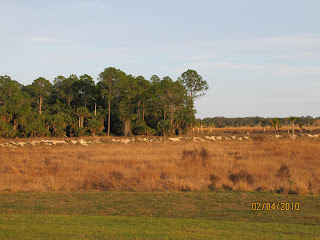 I think we're really going to enjoy our stay here.  We are about 10 miles from Lake Placid, and 20 miles from Sebring, and there are no close neighbors.  But, this is a very beautiful property, and we are looking forward to spending time here.  We'll be meeting the owners on Sunday.  The managers, Jeff and Renee, are who we've dealt with this week when we found this opportunity.  Dan is also hoping to do some Bobcat work, as there are some secondary roads and trails that need to be cleared.  And, Jeff mentioned that they want some picnic tables and park benches built to place around the property.  So, looks like he could be busy.  Of course, those things will all be paying jobs.
This development was started about 3 years ago, and then with the housing market collapse, there hasn't been much activity here.  But the owners are hopeful that things may be turning around.  We sure hope so.
So, until next time.......
at 9:22 PM 1 comment:

We finally arrived at Little Charlie Creek RV Park, Wauchula, FL at 5:45pm.  The orange trees are loaded with oranges.  Will get pictures tomorrow.
As I said yesterday, the staff at Camping World and Lazy Days couldn't have been nicer or more concerned about getting us out of there, but today seemed like a LOOOONG day.  After installing the new satellite antenna, we were unable to get a signal on the bedroom TV on Thursday, but we were able to watch the front TV which worked great.  So, the guys checked the cable, before it was passed through the roof to the bedroom, tested both receivers, and finally decided to change out the new antenna.  SUCCESS!!!  We have the latest Slimline DirecTV multi satellite antenna which sees all three DirecTV satellites.  We no longer have the pretty black dome on top of the motorhome, but when this antenna is stored, it is much lower than the old dome.

So we left Camping World with 4 new house batteries; a revamped, cleaned and painted battery compartment; new battery isolater controller; new satellite antenna, 2 new DVR HD receivers; and testing of several systems which we had questions about, all of which checked out OK.  Just can't say enough about the guys who worked on our home.  They were great.  Should have gotten a picture of them.  Especially, Will and Gene, who worked on the TV issues, and Eric, who solved all our battery issues.  Seems that the original wiring was not REALLY done incorrectly, but was not done to maximize certain usages.

Some things about the fulltiming lifestyle are just like living in a "sticks & brick", but we've learned to go with the flow.  We still don't have to scoop snow, mow grass, maintain a 2800 sq ft house, or go to W**K.  :)

Anyway, we are quite happy with Camping World in Seffner, FL and the staff at Lazy Days for the 2 days we stayed with them and then finding Kasey.

We are really looking forward to meeting up with friends we met here last January.  But tomorrow is devoted to cleaning, as the motorhome hasn't had a good cleaning for several weeks.

Dan and Gail
Anywhere, United States
We are Dan and Gail Brogdon from central Illinois. Dan was in the home building business for 40 years. Gail was a critical care RN for 30 years. We lived in Rochester, IL for 32 years, and began talking about the fulltime lifestyle in early 2000. In November of 2005 we purchased a Thor Mandalay 40' diesel pusher motor home after spending a year researching 5th wheels and motor homes. We began fulltiming in June 2008 and will use this blog to allow our family and friends to follow our adventures as we travel this wonderful country. We plan to do some campground hosting and volunteering to help offset campsite fees, and will do quite a bit of boondocking in some “off the beaten path” places and check out the "local coffee shops". We hope you will follow along with us on our journey as we travel along this new road.

Our Home on Wheels 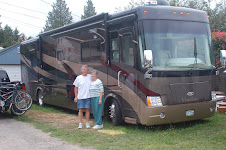